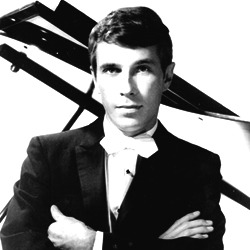 Lucien Lienfelder, noted American concert pianist and artist was born in 1932 at La Crosse, Wisconsin. He moved with his family to Highland Park, an exclusive neighborhood near Dallas, Texas at the age of 6. His father, Cyril Leinfelder was principal owner of Leinfelder Furniture. In 1939 Cyril became ill and this prompted the move to Dallas, where he thought the climate would be better for his health Lucien's mother, the former Lucia Gage, a well known New York opera singer was influential in encouraging Lucien to begin serious study of piano and music. Lucien proved to be an amazing talent quickly mastering the keyboard at an early age and he soon surpassed the skills of his piano teachers.

Upon graduation from Highland Park High School in Dallas, Lucian attended The Juilliard School studying piano under the tutelage of the renowned Madame Rosina Lhevinne. Lucien's schoolmate and friend, Van Cliburn, also a promising young pianist from Fort Worth, Texas was a fellow pupil of Madame Lhevinne. Both Lucien and fellow artist, Van Cliburn went on to have noted concert careers and are known as being among the greatest classical pianists to come from Texas. [4]

After graduation from Juilliard, Lucien began a spectacular solo career having notable performances with the Dallas Symphony, Houston Symphony, Milwaukee Symphony, and others. Lucien had recitals worldwide, including at The Town Hall (New York) and nationally on ABC-TV. Lucien was Co-winner, Dealey Competition.

A multi-talented artist, Lucien's interest in fine art and painting became a commercial success when his work was discovered by a neighber who was owner of a well known furniture and art gallery in Dallas. Encouraged by his father, Cyril Leinfelder and finding a growing interest among interior designers and galleries in his decorative oriental screens Lucien launched a equally successful career as a painter. His multi-panel screens were an almost instant success, becoming widely sought after by collectors worldwide. His works sold as fast as he could complete them, gracing fine homes throughout the world. One particularly beautiful screen was purchased to adorn a palace wall of HRH Queen Elizabeth.

Mr Leinfelder has performed as a soloist and guest artist in concert halls throughout the United States and Europe. He was a frequent solo artist with the Dallas Symphony and played with many of the finest orchestras and in prestigious concert halls around the world.

Mr Leinfelder is the subject of a soon to be released documentary. The film trailer can be found on You Tube. The Lucien Leinfelder Story

Notices and reviews In Print

Dallas Morning News - "A dynamic pianist and singer capable of inspiring audience idolatry"
The New York Times - "Pyrotechnical brilliance in degrees and proportions dictated by unfailing good taste"
Telegraph, Amsterdam - "The pianist possesses a jewel of a piano hand harnessed to an explosive imagination, a performer of scope and potency"
Kurier, Vienna - "Amazing tone and color coupled with magnificence and endowed virtuosity"