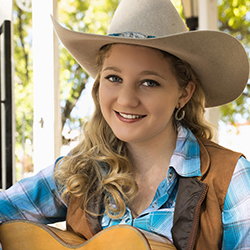 Texas-bred musical powerhouse with captivating western flair. Her singing has been praised as “timeless”, “powerful” and “shimmering”, and is complimented on stage by her swing guitar playing, yodeling, songwriting, and energetic stage presence.
Now 23, Kristyn tours across the US and internationally. She started playing and singing when she was 14, drawn to songs of the western lifestyle because of her passion for the land and livestock and her rural raising. When she’s not playing music, she spends time training wild mustangs and trick riding, and has even ventured into the cattle business via her own small herd of black angus (the “Diamond K”). She draws most of her artistic inspiration from these experiences, as well as the vintage melodies and arrangements that cornerstone the western swing genre, plus styles from other songwriters.
Kristyn brings joy and passion to her music. She was named the 2016 Western Music Association Entertainer of the Year and is the youngest in history (and the 2nd woman) to receive this honor. She is also the 2017 Ameripolitan Music Awards Western Swing Female Artist of the Year and named the WMA Female Performer of the Year in 2014 & 2015.
Most recently Kristyn was awarded the 2017 Pro Cowboy Country Artist Entertainer of the Year and Female Vocalist of the Year. Her latest CD release, “Down the Trail”, has been recognized by both the WMA and PCCAA.
As one venue put it:
"This bundle of energy and talent is 'the rage' on stage from the east coast to the west and if you can stay seated when she finishes her performance you're prob'ly 'bout ready for the grave!!"